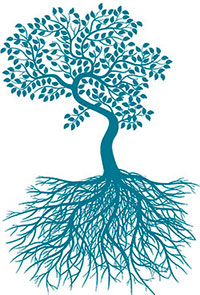 EKOprop® Line. is based on a specific strain of Pseudomonas spp., isolated in Germany and owned by SP Sourcon Padena, part of the same group of Green Ravenna, thanks to a fruitful cooperation with Universities and Research centres.

• it is part of the PGPR - Plant Growth Promoting Rhizobacteria, group of soil bacteria that, living on the roots, stimulate plants growth with the production of natural hormone precursors, such as Auxine, Cytokinin and Ethylene;

• it produces siderophore substances, which are able to chelate microelements, mainly Iron (Fe), from soil and deliver them to the plant;

• it is able to solubilize plants nutrients, such as Nitrogen (N) and Phosphorus (P), from soil and then deliver to the plants;

• in the roots system, it stimulates an over-production of Salicylic acid, one of the most important S.A.R. - Systemic Acquired Resistance precursor, thus increasing plants self-defenses.

The strengths of the EKOprop® Line products is given by the different species of microorganisms included in the products:

• Mycorrhizae: Mycorrhizae promote roots growth, exploring soil areas that normally would not be accessible to plants, in this way making available nutrients that naturally would not. Getting into symbiosis with the plant, mycorrhizae allow a better uptake of nutritive elements, such as water and phosphorus, from soil.

• Bacillus: Bacillus spp. is as well part of the PGPRs, which, thanks to the production of plant hormones, allows plants to grow even in salt stress conditions;

• Trichoderma: Trichoderma is widely known in scientific literature for its symbiotic abilities with the plant, which through roots colonization, bring to soil nutrients improved use.

The synergic effect between the microorganisms increases the efficacy compared to single strain.

A complex interaction between microorganisms, soil and plants is one of the key elements for crops nutrition and health.

The over-exploitation by Modern Agriculture of soil and chemical products, as mineral fertilizers and synthetic pesticides, brings to excessive mineralization of the organic matter and reduction in soil microbiota.

EKOprop® products constant applications help to balance the natural microbial community both in soils and on leaves, bringing the plants back to their natural fertility.

A mix of different microorganisms is essential to optimize the nutritional efficacy and efficiency, mobilizing recalcitrant nutrients and reducing the amount of synthetic products to nourish and protect the crops.

There are some problems in filling the form.

Are you sure you want to remove this item from the cart?